New Jersey is one of the only places in the country where a large proportion of the buses are run by private, for profit companies.  These are not just transportation contractors working for the state and cities.  They own their routes and garages, and some of them,  have been around forever. Most notable in this respect is DeCamp Bus Lines of Essex County, which was founded in the 1870s, when a Major DeCamp bought a stagecoach after returning from the Civil War.

But this system is in decline.  Over the past decade, private operators have shed unpopular routes, and some have completely shut down.

The private transit companies pay for all of the operating expenses, but the state helps out with capital costs.  It’s completely in NJ Transit’s interest to do this.  It would cost them more if the private carriers were to shut down, and NJ Transit had to take over the routes and operate them directly, or pay another company to operate the routes under a contract.

Another indirect subsidy comes from the fact that the private bus companies can use the shiny, new state-owned buses for their charter operations on the weekend, on use them on runs to Atlantic City subsidized by the casino industry, both important sources of revenue.

It’s unclear how long some of these private lines can continue operating with only capital subsidies.  Lakeland, for instance, has three commuter routes connecting Sussex, Morris, and Somerset County points to New York City. According to National Transportation Database reporting, it has been running millions of dollars in the red every year since 1998. 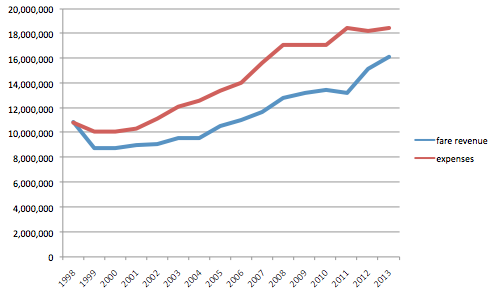 Fare revenues have been rising since 1999, but nowhere near enough to cover operational costs. Now, let’s look at Rockland Coaches. This company runs several commuter routes through Rockland County, New York and the northeastern portion of Bergen County.  NTD data was missing for the year 2000. 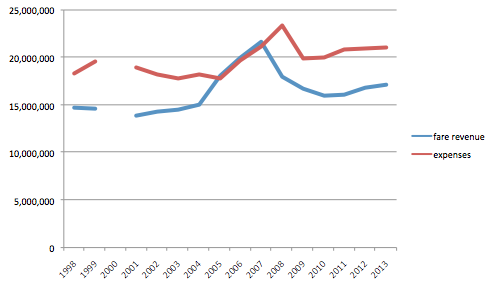 Except for a brief period between 2005 and 2007, fare revenues fell well short of operating expenses. However, this company is owned by Coach USA, a bus conglomerate that owns several transit properties in New Jersey.  I would be hesitant to entirely trust these numbers, because we never know if central management is shifting profits or revenues around between divisions, or operating one company’s route with another’s buses. It’s also unclear if the reports for Rockland Coaches includes Red and Tan Lines, a now-defunct Coach USA company that operated in Hudson County.

But regardless, the company is losing money and has been for a long time. And now, DeCamp. From 1998, when NTD reporting started, until 2002, DeCamp brought in fare revenues just above their operating expenses.  In 2003, the Montclair Connection opened, bringing Midtown Direct train service into direct competition with DeCamp. Revenues quickly dropped and never fully recovered, while expenses continued to rise. 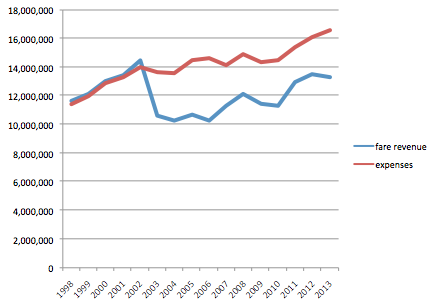 “Gary Pard, vice president and chief operating officer for DeCamp, testified that the company had lost 1,200 daily riders on the three routes that compete with the Montclair Connection, amounting to a loss of more than $1.5 million a year. Over all, he said, the company has been operating in the red for the last three years, though layoffs and other cost-cutting measures have reduced losses to about $50,000 last year from $350,000 in 2003.”

Ridership on all three systems is gradually declining. 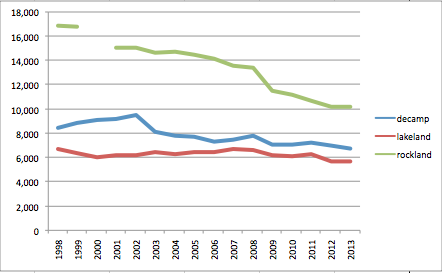 Some private bus companies, like Academy, which owns commuter routes between New York and Monmouth County, and ONE Bus, which runs three local bus routes between Orange, Newark and Elizabeth, are still netting millions of dollars in profits every year. But how long can the private operators continue to lose money?  They could raise fares, which would drive away many of their riders and be a hardship for the ones that remain.  Or, NJ Transit could take over their services.

In 2012, NJ Transit took over route 10 on Kennedy Boulevard in Bayonne and Jersey City, after Coach USA announced plans to abandon the route.  Jitney competition had rendered the line unprofitable.

In 2014, Coach USA’s Rockland Coaches announced plans to cease operations on three of its routes:  11C, 24K, and 20/84. After a period of limbo, NJ Transit announced that two of the routes would be picked up by Saddle River Tours, a charter bus company, although with reduced service.

It remains questionable whether NJ Transit can afford to keep picking up faltering private bus lines, in a time when state contributions to the agency’s budget are declining, including an annual $295 million contribution from the Turnpike Authority that is scheduled to expire in 2016.