Like many Los Angeles neighborhoods, Los Feliz is served by DASH, a local circulator bus service run by the City of LA.  The Los Feliz DASH runs every 15-20 minutes from 7am to 7pm. On the weekend, a similar route to the Griffith Observatory runs every half hour.

I have criticized DASH before for running meandering, zig-zag routes and one-way loops.  Neither of these are ideal paths for a transit line, mainly because most human travel does not occur in zig-zags or one-way loops. 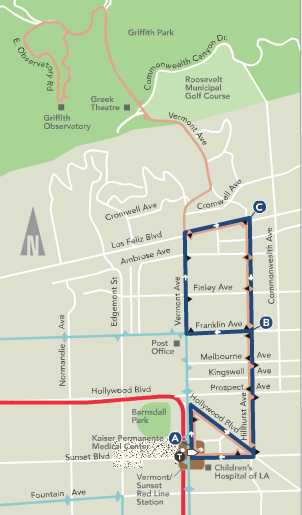 The Los Feliz DASH is not one loop, but two.

Enough has been enough.  The chairs of the Los Feliz and Silver Lake Neighorhood Councils are calling for a simplified, expanded DASH route that would serve both neighborhoods.

The chair from Los Feliz, Luke Klipp, is a transportation analyst.  The proposed route would run via Hyperion, Fountain, and Vermont.  Service on Hillhurst would be dropped, as would circuitous loops and one-way operation.

The route would act as a feeder to the Red Line at Vermont/Sunset in both directions, and would serve a high school, grocery stores, and areas with concentrations of multi-family housing.

Despite the residential density that exists here and proximity to the Red Line subway, transit service in the area is sparse.  Between Riverside Drive and Sunset Boulevard, the only bus service in this part of Silver Lake is the Metro 175 bus, which has an indirect route that makes it impractical for accessing the subway station, and runs irregularly, with waits of over 1 hour 15 minutes.

This proposal, if enacted, would represent a huge improvement to the status quo.  But it’s lamentable that it takes a neighborhood council headed by someone interested in transportation to make proposals like these.  Many neighborhood councils are mostly concerned with parking, or just disregard transit.

Right now in Los Angeles, politicians can make or break a transportation project, like the city councilmembers who can singlehandedly kill a bike lane. If it takes an activist neighborhood council to demand decent bus service, something is wrong with our system.