Separately from its bus service reductions proposed for September,  New Jersey Transit is also implementing two major bus service changes.  These are not proposed cuts or reductions, just restructuring, meaning that the changes do not require public hearings.

Sit tight.  I will talk about the routes proposed for cancellation in a future post.

The first:  A reroute of some trips on the 553 bus that runs from Atlantic City to Vineland and Bridgeton to run through the town of Buena, NJ, (pronounced “byoo-na”). The service runs about every half hour. Every other trip will be routed through Buena, giving the town hourly service. Buena is a borough of about 4,500 residents and previously had no bus service. 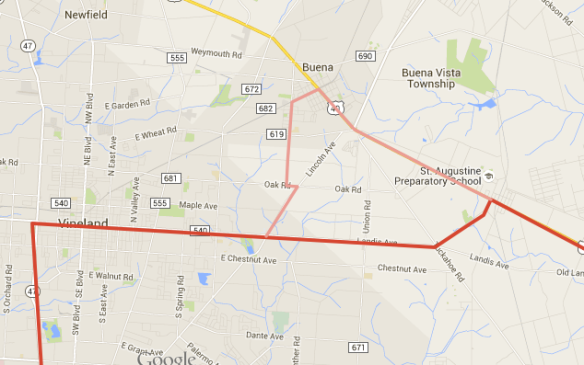 Current route in red, new alternate route in pink. I apologize for covering up the label for Vineland 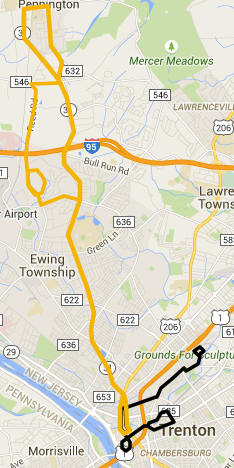 This is a big deal.  A town is getting hourly bus service where there previously was none. Hopefully, people use this service and it is retained.

The second big change is the combination of two Trenton-area bus routes, the 602 and 604, into one combined route, the 624. The 602 runs every 90 minutes or so to Pennington, NJ, and the 604 goes to the neighborhood of East Trenton.

The new combined route will run from Pennington into Trenton, and then to East Trenton.  They already run combined on Saturday, so this will simply make that a weekday operation as well.

NJ Transit’s map of the 624 is unclear exactly what the route in downtown Trenton is. 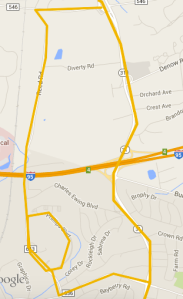 The 602 also had a variation near Pennington where some trips diverted off Pennington Road to serve some office parks and apartments.  This diversion was simplified, and all trips now serve this route.