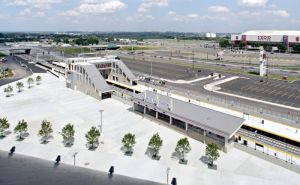 The Meadowlands Rail Line does not stand up well to public criticism.  Its $185 million construction cost was entirely borne by the state, and could be seen as an indirect subsidy to the developers of the half-finished megamall Xanadu/Meadlowlands/American Dream. Which, by the way, has required about 1 billion dollars of not-so-indirect subsidies as well.

The rail line serves a new station between Metlife Stadium and the unfinished mall.  Trains run only on a few days of the year when a high-profile event is taking place, shuttling back and forth between the Meadowlands, Secaucus, and Hoboken.  Despite this, the terminal station is not especially good at transporting huge quantities of people, as we found out during the super bowl.

The station has 3 tracks and 2 platforms, and the station is the end of the line, so trains have to reverse direction and cross between tracks, slowing down operations.

For comparison, the LIRR’s Mets-Willets Point station near Citi Field has 3 platforms and 6 tracks, and is not located at the end of the line, plus a subway station located nearby.  The LIRR’s station at the Belmont Park Racetrack, a terminal station, has 4 platforms and 8 tracks.  Metro-North’s Yankees – East 153rd Street stop has 2 platforms and 4 tracks, plus nearby subway stations.

But soon, the line might enter daily use.  This all depends on future development at the site.

The Xanadu/American Dream project, surprisingly still not dead, is actually under construction at the moment. As of spring 2015, the megamall was slated for a fall 2016 opening.  This probably means that the mall could open as soon as spring 2017.

There have also been rumblings for Meadowlands Casino located on the current site of the Meadlowland Racetrack, adjacent to the new station.  The casino would require voter approval, because gambling is currently not allowed outside Atlantic City.  A portion of the casino’s revenues would be sent to Atlantic City to prop up its withering casino-based economy.

Developers say the Casino could open in 2016, so that means we might see it some time around 2017.  There’s also a possibility that the Izod Center site could be redeveloped, possibly as a hotel.

Combined, the casino and mall could provide enough steady demand for regular train service. Casinos are a huge demand generator for public transit trips.  A network of buses bring gamblers from across the Northeast to casinos in Atlantic City, Pennsylvania, and Connecticut.  Some gamblers leave at around 7:30pm, and return at 4am, to sneak in a night of gambling between work days.

The American Dream Mall, if it becomes a successful tourist attraction, could also feed thousands of passengers onto Meadowlands trains.  Tourists, who in all probability, wouldn’t want to rent a car just to drive 15 minutes outside the city.

And then maybe, our $185 million investment wouldn’t have been such a waste.