It’s a rare moment when there is a new entrant into the commuter bus industry. In fact, there is probably a once-in-a-decade moment or less.

A new company, OurBus, is running a low-cost, express commuter bus from the Kendall Park Park and Ride, putting it in direct competition with incumbent carrier Suburban Transit on Route 27.

Planet Princeton has the scoop:

OurBus offers a one-seat ride from the Kendall Park Roller Skating Rink lot on Route 27 to New York, making one other stop in Franklin Township along the way. The bus makes four stops in the city, arriving at Times Square at 8:15 a.m. and then stopping at Bryant Park, Grand Central and Madison Park.

For those who are keeping track, a one-way between the same point via Suburban Transit costs $13 and a monthly is a steep $410.  That means OurBus is charging almost half what Suburban is asking.  Yikes.

Let’s also look at the running time.  A standard run on the Suburban Transit 100 (their main line) takes a painful 1 hour 35 minutes.  This is mostly because the route tuns local from Route 1, through the Tower Center/Nielson Plaza Park and Ride, Downtown New Brunswick, and Route 27 all the way to Princeton.

OurBus accomplishes the same run in 1 hour 20 minutes.  Remember, that’s to Times Square.  Suburban goes to the Port Authority.  That incremental avenue block from 8th to 7th probably takes 5 minutes in its own right, so OurBus is probably getting to the Port Authority area in around 1 hour 15.  After that, OurBus heads to Grand Central and Madison Square Park, according to the article.

Perhaps not coincidentally, it seem that Suburban has implemented a new express trip that skips the Tower Center stop, leaving at 6:40am, a mere 15 minutes before the OurBus departs.  Is Suburban trying to keep OurBus from expanding its market share?  It looks like it.  Unfortunately neither publishes ridership statistics so only time will tell.

This brings us to a question:  What is OurBus? Let’s take a look at their website. 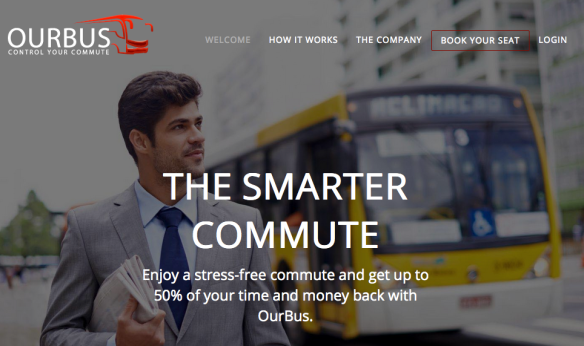 Planet Princeton says they are a “technology platform that allows commuters to create their own demand-based bus routes that pick up near their homes and drop off close to their workplaces. A proprietary algorithm creates routes that stop near commuters’ homes and places of work. The platform then works with charter coach companies to serve their needs.”

Working with charter coach companies may explain how they can keep the ticket price so low.  And the demand-based approach is probably why they launches with so little media coverage.  This is the first I’m hearing about it.

It looks like a smarter way of creating commuter bus routes.  Crowdsourcing for transit, if you will. This is smart.  Transit demand is so scattered in most markets that it’s hard to do this, but for CBD-bound daily commuters, departure times and locations are highly static.  Some people have been making the same commute for 40 years. It would be harder to crowdsource a local transit route with 10-minute service.  That has a lot of walk up customers and that kind of demand is hard to crowdsource.

They may be on to something.