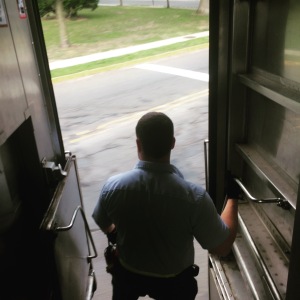 Most commuters don’t like NJ Transit’s electric multiple unit cars.  These are the stainless steel sided rail cars that have built-in electric motors, rather than being pulled by a locomotive.  If you’re a regular rider, you might know these cars by their dated 1970s interiors with brown faux wood paneling and brown faux leather seats.

These cars also have a unique feature:  manual door operation.  Using a key, the conductor can open the end doors of the car ahead of time, often 10-15 seconds before the train comes to a complete stop.

All of the other cars in NJT’s fleet have interlocking doors.  A circuit prevents doors from opening until after the train has come to a complete stop. Only a second or two after this happens, the doors begin opening.  It takes about 1-2 seconds for the doors to fully open and the conductor to begin stepping off the train.  Then, after the conductor has gotten out of the way, boarding/alighting activity begins.

All in all, opening the train doors while the train is pulling into the station saves about five seconds.  This is a mere trifle in time, but stop after stop, it adds up. A local from Hoboken to Gladstone makes 23 stops.  23×5=115 seconds, or nearly two minutes.

Other ways of cutting two minutes off a train’s running time can include engineering work to upgrade the tracks and switches, at the cost of millions of dollars, or by straightening curves on the right of way, which could cost even more.